I’m sat in a beautifully decorated cafe on the grounds of a magical garden, sipping on my complimentary, homemade herbal ice tea, having a deep conversation about life with a-five-minutes-ago complete stranger and I’m thinking I’ll never forget this day.

On a scorching hot Monday afternoon, after waving goodbye to our temporary holiday home in Protaras, we just made it for the first time to Cyherbia, a botanical park in Avgorou village.

From just walking through the entrance, you cannot but admire the creators’ love for what they do.

It may not have been the best day to visit. It’s the middle of the day, 35 degrees Celsius and we are about to wander in a maze, after a quick walk around the herbs garden. I’m melting, physically melting. I can’t remember the last time I sweat so much. At least we have umbrellas (the owners have really thought of everything). I found it amusing we were lost in a maze, holding our colourful umbrellas. Hah the little things.

My dear dear mamma enjoyed it more than I expected, despite our heads were so hot you could fry an egg on, she loved every minute of it. I can’t say the same for the little one, a typical 20 year old, complaining Oh is too hot! 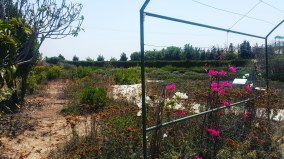 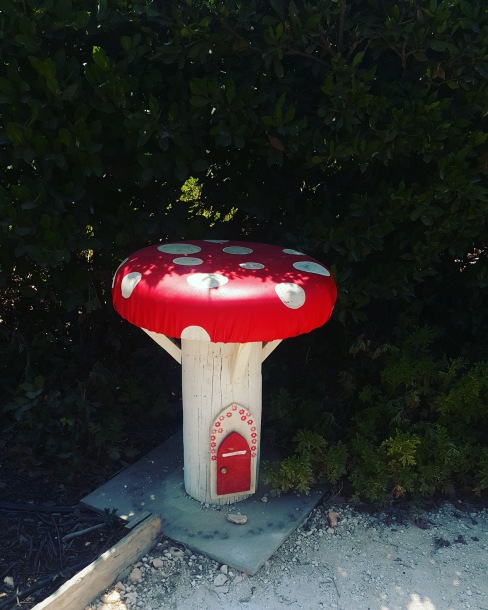 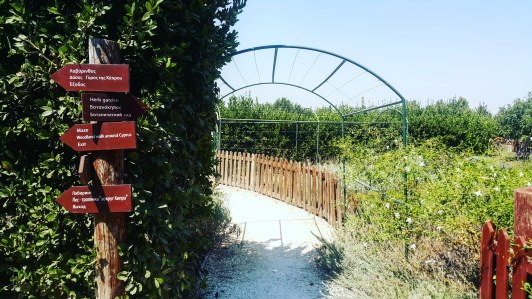 After we finally made it out of the maze we walked into the cutest little fairy house. For a moment, you could not but just believe in magic…

With our 5 euro entrance ticket we get a complimentary homemade ice tea, so after about half an hour in the heat, we tried the lavender liqueur, ordered our teas, a couple of muffins, a banana and carob and apple and cinnamon (homemade and delicious) and sat at the beautiful cafe. So, so beautiful. Everything is beautiful here.

Whilst sitting at the cafe, a man came over to chat to us. He asked our mum who these ‘cute girls’ were. To begin with, we were taken aback,  I couldn’t stop thinking what his motives were but I didn’t want to appear rude so we introduced ourselves and that was the start of a heartwarming conversation that left me leaving warm and fuzzy inside.

Mr Adamos is the owner of Cyherbia. Himself and his wife made all of this.

He is smiling all the time, calm, peaceful. When you talk to him you cannot but smile.

He found the meaning of life, for him. That’s what I felt from the little I got to know him. He seemed at peace. He found his happy. He quit his old life to live in a little village in Cyprus and spends all of his time with his family, planting, landscaping, spreading the love, making others smile.

I’m the practical one, gardening, doing work around and my wife is the creative mind behind all of this. But can you tell what the shape the trees on this part of the park form, the ‘Round of Cyprus’ forest? It’s Cyprus, and here’s where I’m from, Kyrenia.

One of the many things he said that stuck with me, Life is a gift, the most beautiful gift God gave us, we HAVE to enjoy every minute.

If Cypriot hospitality was a person, that would be him. Although he only had just met us, he treated us with figs cut fresh from his fig tree, gave us a pouch of deliciously smelling lavender each and gave my mum an aloe vera plant. A generous man who loves sharing whatever he has with complete strangers.

With him it was an old friend, Christos. Mr Christos and Mr Adamos were childhood friends and were captured by the Turks in 1974 together. They hadn’t seen each other since. But today, they met again after thirty odd years.

I hesitantly asked if I could take a picture of them. I’d have regretted if I didn’t. What were the chances the day we decide to visit Cyherbia that these two then young little boys and now 50 year-olds, would meet again after three decades?

That was such a special moment I wanted to capture. I don’t normally ask people I barely know for a picture.

Mr Adamos, sweet as he was, he of course agreed. Take a picture here, I love this spot! 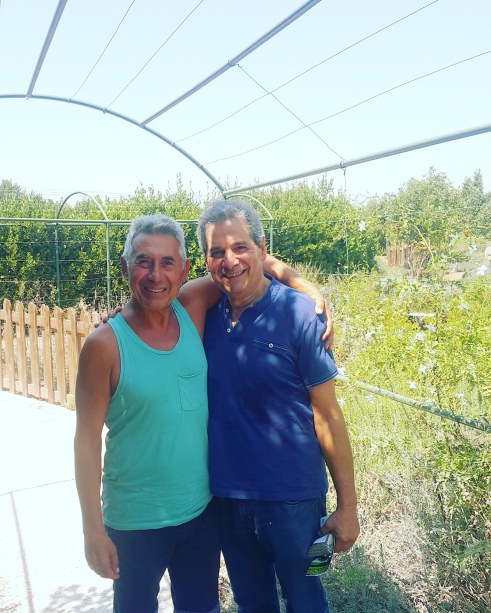 After a while Mr Adamos had to leave (to catch the barber’s for his haircut!) so we hugged him goodbye. It’s the fastest I made friends with someone.

He asked us to go back for Halloween, they’ll have a pumpkin festival, they’ll do pumpkin carving amongst others. I sadly explained I won’t be there. I  so wish I could. But I’d love to visit in spring, when all the flowers and herbs will be blossoming!

Just before we were about to leave to hit the beach, we went up the intriguing looking stairs at the end of the cafe, which led to a beautiful terrace, with tables, chairs and dreamy swings, overlooking the park. The surprises never end at this place. Just magical. I asked the little sis to take a snap of me. She took a couple already when I was not looking.

She unknowingly captured that rare moment of pure happiness I somehow experienced twice in the last four days. 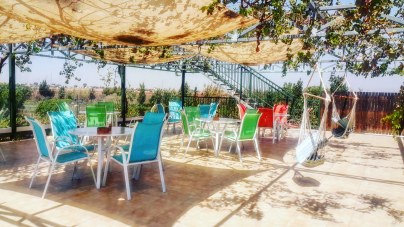 Thank you Mr Adamos and lovely wife for a day I’ll always remember.