My mum, 8 years old then, with two of her three sisters, her brother and her parents woke up terrified and were told that Turks invaded Cyprus and had to leave their home and ran into safety. Her eldest sister was with her grandma and grandpa, captured by the Turks. Later on a kind Turkish officer would disguise her and she would pretend to be an old lady so she could escape and avoid rape and murder…

A few cities away, my dad, his two sisters and his mum were on the run, desperate to get into safety… They would live in a refugee camp for months…

My dad still has some photos from the time he lived in those but since they are all back home in Cyprus. I found these ones online, to give you an idea of life after the invasion. 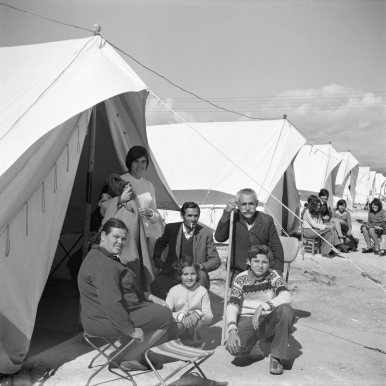 I’ve heard and read hundreds of horror stories over the years, not just what I’ve been taught at school (not much) but from my parents, relatives, family friends and my own research.

I spent endless summer nights with my dad sitting on our balcony, having a cold beer and him narrating everything that has happened with chilling details, from the 15th of July 1974, the coup, the assassination attempt of the then president Archbishop Makarios (his statue is still in Madam Tussauds), the historic moment he addressed the Cypriot nation on the radio confirming he was alive, until that horrendous day, 20/7/1974 that left a horrible mark on my little island’s history for ever.

43 years later, a lot of people are still missing, several have died in protest (I vividly remember the summer of 1996, when Solomos Solomou, upset and emotional after his cousin’s murder, was shot dead by a Turkish officer, whilst climbing on the flag pole in an attempt to take down the Turkish flag and replace it with the Cypriot one. The whole island watching this were terrified that the Turks would invade Cyprus again, I had nightmares for years after that day)  and Nicosia is the last divided capital in the world. 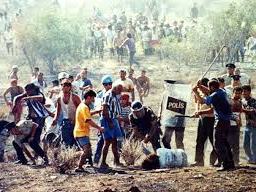 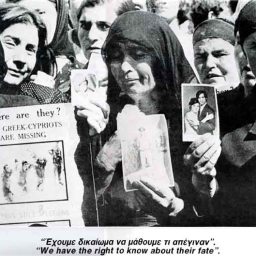 I won’t get into too much politics but I’m aware that England, Turkey and Greece had already divided the island since 1963, 11 years before the invasion and the infamous Green Line that still divides my little island got its name from the colour of the pen the then British Commander Young used to split the island on the map. British forces are still in Cyprus to keep the ‘peace’ between the two ‘governments’.

It’s sad that after all these years the island is still divided and all because of politics. My grandparents and parents used to live with Turkish Cypriots in peace until politics destroyed everything. My grandpa can still speak Turkish, as he had Turkish Cypriot friends.

It’s sad that my little sister’s generation doesn’t really know much about what happened and a lot of the memories and the history will die when my generation dies.

I remember my dearest grandma Stella describing me the beauties of her birth place, Kithrea, the river that run through it, Kefalovriso, how my mum used to play with the ducks in the river, my grandpa telling me all about his life before 1974, being a shepherd, spending his days in the fields, playing his flute. I remember my dad’s hilarious childhood adventures, running around getting himself into trouble, working at his uncle’s restaurant and many many more stories.

I’ve always wanted to write them down so they don’t die with me and that’s on my bucket list.

I can keep on writing about my little island’s history for days but the only thing I want to say on this day is:

I hope that one day I don’t have to show my passport to visit my mum and dad’s homes, the places they were born and grew up. I’ve only visited once and I found it extremely sad and felt sorry for Turkish Cypriots who most live in poverty. There is so much beauty on the other side of my island but no money to let it shine through.

I hope one day my little island will be united again, even if it’s under two governments.

Until then, I’ll never forget and hope for the best.